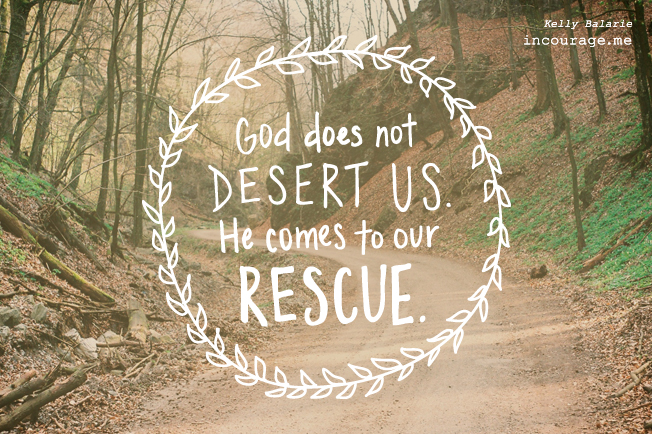 Darkness can be alluring. It calls us, saying, “You won’t get hurt. Come and see what I have for you. Go your own way. No one will ever know. No one will see you.”

But often, what we hide in the dark ends up snagging us, catching us and having us for dinner. What we think is carefully hidden away, bites us when we least expect it.

It reminds me of the story of Little Red Riding Hood. She was cute. She was adventurous. She had good intentions. She was bringing delicious food to a sweet old grandmother, after all. It doesn’t get much more honorable than that!

Eager to give, happy to serve and ready to love – she was the ideal target for a hungry wolf. A wolf hiding and waiting to snatch her, so that she could not live out her calling.

He succeeded. Because our adorable Little Red Riding Hood, skipping with her basket of fruit, jumped at the chance to do things her own way…

…Continue reading this story at (in)Courage.  You will love where this story leads!

***Easy, fast & with the potential to win an Amazon Gift Card – if you haven’t already, sign up for these blog posts by email.

Sometimes we see life gearing up to deliver a punch that we think can take us down. We see it winding back, we see it gaining power and we immediately know what to do – we get afraid.  We curl up in a ball of fear – aggravated, tormented and usually alone.

Why? Because we see every detail of the punch- the blood, the anguish, the embarrassment and the feelings.  And we know one thing is for sure – we are in for it.

I can’t even begin to tell you the places my mind has wandered, the things I believed would come true and the ditches I thought I would be in.  I was the queen of fear and I still struggle with it today to a degree.  My fears would stop me in my tracks.  They would consume my mind.

Somehow we think that by worrying, we are gaining control over the situation.  It’s almost like we think we have power to change the unchangeable.  Until we come face to face with the reality that we aren’t in control – and then we fear more.

So, can we take charge of this bully called “fear” and prevent it from ruling us? From mocking us?  From pushing us around?

I have tried every trick in the book to combat fear: the imagine-the-worst-case-scenario trick, the worries-only-happen-99%-of-the-time strategy and the just-don’t-fear approach – I have tried it all. None worked.

But, there is one approach that helped me to stand up to this bully called fear – and I think it will help you too.  But, in order to be successful at this, you have to get ready to feel like an underdog. You have to see yourself for what you are – a small warrior.  And, you have to relate to another small guy who gets your predicament  – David!

Little David stood up against one big bad bully named Goliath.   Could he have cowered in fear?  Yes. Could he have walked away from God’s mission because it was scary?  You bet.  Could he have told the Israelites to get out here in fight instead of him?  Absolutely. But he didn’t.

David fought what could have been decapitating fear in 3 ways:

1. He remembered and drew strength on God’s faithfulness in the past.
The Lord who rescued me from the claws of the lion and the bear will rescue me from this Philistine!” (1 Sam. 17:37)

2.  He looked up to the One Giant larger than the giant.

“…Who is this pagan Philistine anyway, that he is allowed to defy the armies of the living God?” (1 Sam 17:26)

“But when David’s oldest brother, Eliab, heard David talking to the men, he was angry. “What are you doing around here anyway?” he demanded. “What about those few sheep you’re supposed to be taking care of? I know about your pride and deceit. You just want to see the battle!” (1 Sam. 17:28)

If you are not fearing something today, you likely will be tomorrow.

What if you were to approach the looming punch differently?  What if instead of cowering down to the giant bully called “fear”, you choose to do something differently?

Imagine for a moment, a little boy.  He stands before the meanest, baddest, strongest bully the school has ever seen.  But, for some reason this boy stands smiling.  This boy stands proud, fearless and courageous.  He stands strong.

He is able to let go of fear, because he sees something the other kid cannot – his own Father.  His father stands directly behind the bully and he stands waiting to help his son, to protect him and to ensure the right outcome to this situation.

If you believe God is right there for you, could you approach your giant differently?

There is no giant bigger than the giant of God.

Rather than running to hide, living anxious or cowering in fear, look to Him to gain strength.  See how he has delivered you in the past.  Lean on his faithfulness.  Don’t let naysayers intimidate you or circumstances rule you.  God will deliver you when you trust him.

God will put the giants of your life into perspective.  He Is. They aren’t. With God, we can let go of fear.

Don’t miss any updates on Purposeful Faith! Click Here to receive blog posts to your email inbox.  Sign up today to be entered into a sweepstakes to win an Amazon Gift Card.

Shame in the Bible 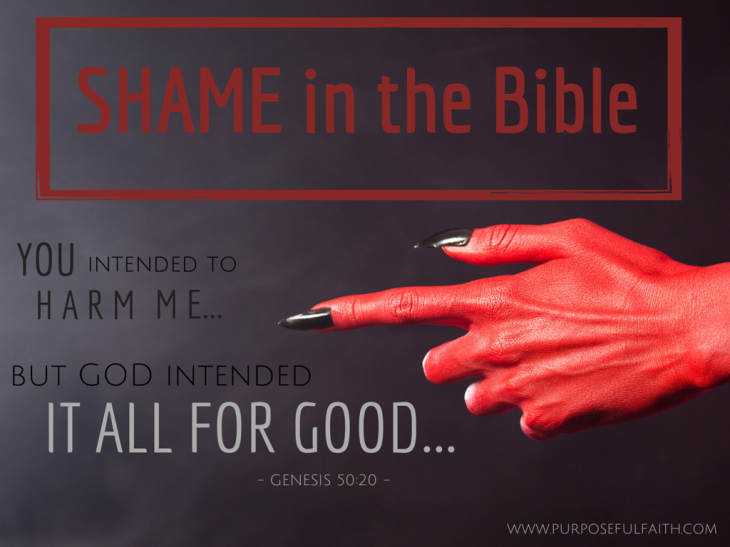 I messed up again.Guilt hit me like a wrecking ball pounding into a damaged building ready to crumble.  It hit me hard and when the shame came – it effectively ruined me. Defeated, crumbled, laying in pain – I hurt.   I wondered, what does God say about shame in the bible?

Starting up at the sky, I realize, I lost sight of Christ, what he has called me to do, his unique plan for me, his purposes, his might, his power, his authority.

I lost sight of it all.

I looked at another person and decided God’s blueprint for my life wasn’t as good – wasn’t so possible – after all.

Then, the shame overpowered my guilt.  It crushed me because I lacked faith.  It left me feeling embarrassed that Miss “Encourage” was “Discouraged” (I am called the “Cheerleader of Faith” after all).  It said I am defined by my sin of envy, jealousy and comparison.

My guilt said I messed up – but, my shame said I would always mess up.

Shame tumbled me.  It came to thwart God’s plan – to knock me down.  Unrecognized, it would have succeeded.

But, as I stared at my wreckage, God got me to thinking…

I got wrecked, because I took my eyes off of Christ.

I got wrecked to divert me from God’s mission.

God has great plans for me.
The Devil wants to wreck anything that brings glory to God above himself.
Jesus didn’t die so I could be condemned; there is no condemnation for those in Christ Jesus.
God loves me; he will take the wreckage  and reconstruct me as I ask for forgiveness.

We can’t let shame knock us down.  We can’t let shame win.  Because, you better bet it will try to tell us that we aren’t good, holy or lovable.  Shame will come to trap us under the bricks, holding us down so that we can’t accomplish God’s purposes.Shame is one of the devil’s best tools to chisel away at our faith walk.

He has used it since the very first days – days when all was happy and joyful and peaceful in the garden of Eden.  He offered sin on a plate – and now we talk about this apple over and over again.

Sin distanced us from God.  In fact, we see shame in the bible, as Adam and Eve hid from God (Genesis 3:8) after they sinned.  The were so burdened by shame and so overwhelmed that they didn’t want to stand in front of their glorious maker. They wanted to hide, to go unseen, to cower in fear, to go under the radar, to pretend it didn’t happen.  They wanted to avoid God at all costs.

Shame makes us run.  It makes us hide.

The devil knows this. He knows if he can get us to move towards sin, he can hit us with his powerful wrecking ball. He has a plan to hit us – and to hit us hard.

What if Adam and Eve ran to God, instead of hiding?  What if they called out to Him?  Their shame didn’t protect them, or absolve them or benefit them in any way.

…and they hid from the Lord God among the trees of the garden.  But the Lord God called to the man, “Where are you?” (Genesis 3:8-9)

The Lord could still see them clear as day.  He knew where they were – and what they had done. There is no hiding from God.

And, today, we don’t have to hide because there is no more shame in Christ Jesus. Christ absolved us of all shame, because he endured all shame.  Enough.  It’s done.  It is finished. (John 19:30).  Released.  Gone.  Done. Complete.  As believers, we are secure.

God wants us to come to Him – open, vulnerable and ready to receive what he has done.

Reveal your shame, and he will reveal grace.  Come to him out of hiding and he will come to you with healing. Run to his arms and confess and he will give you rest.

God’s story of redemption is beautiful.  It all circles back to Him.  Even when we mess up – it is all about Him.  Praise you God.

God loves us.
God calls you from hiding.  He has important words to speak to you about shame in the bible:
Come now, and let us reason together, saith the LORD: though your sins be as scarlet, they shall be as white as snow; though they be red like crimson, they shall be as wool. (Isaiah 1:18)

There is therefore now no condemnation to them which are in Christ Jesus… (Romans 8:1)

As far as the east is from the west, so far hath he removed our transgressions from us. (Psalm 103:12)

For I will be merciful to their unrighteousness, and their sins and their iniquities will I remember no more. (Hebrews 8:12)

We can’t stand accused when we stand forgiven.  Confess sin, accept grace, sin no more and rob the devil of his best tool.