We women are praying people. We can hardly help ourselves.  When we lose it and run out of patience – at 9am – already four hours into our day. Under our breath in a moment of frustration. For our friends and husbands and children so in need of hope and help. Over our troubled world. After a stunningly happy surprise. We pray.

And yet, we can find prayer baffling. At times, even unsatisfying. We wonder, does this make any difference? Is God listening? Will he answer? Why is he taking so long? Why do we feel so cut off from him? What if we’re praying in the wrong way?

Like a coin, prayer possesses two sides. We see this in how Jesus prayed. In the deepest hours of his personal life on this planet, in a garden the night before he went to die on a cross, Jesus prayed “Take this cup, yet not my will but yours be done” (Luke 22:42). Two specific prayers: First: Take this Cup. Then: Not my Will. Such a duality powerfully displayed in three of the gospel accounts, and mentioned in the fourth. Two sides of Jesus. Two sides of us. Two sides of prayer. The Prayer Coin.

When Jesus says, Take this Cup, that’s the honest side of the prayer. He reveals his own desire, “This is what I want.”

Then Jesus flips the coin, praying Not my Will, the side of abandon. Abandon is saying to God, “But what do you want, God?”

Notice that in between the two sides of honest and abandon is the word “yet” which forms the edge of the coin – a kind of pivot where we tip back and forth between each side, experiencing one side at a time: honest (what I want) – pivot – abandon (what do you want, God?) – pivot – honest – pivot – abandon.

Take this cup, yet not my will but yours be done.

I remember my heart beating a bit faster when I paused to take in this realization. It still steps up-tempo even now as I try to put this discovery into words. This prayer is quoted more than any other prayer in the Bible. Yet…(there’s that pivot!), have I ever prayed it? For myself? For those I love? Have you?

Is that even a “thing?” Do I dare consider praying this prayer? I mean, this was Jesus’ garden prayer. He prayed it in the last night of his earthly life. Before his heavenly Father. When he was in torture in the anticipation of death on a cross. Surely my circumstances will never match up to that.

Yet…(again!) in each of the gospel tellings, Jesus repeatedly invites his disciples into the prayer. That their exhaustion sends them to sleep instead is not the point. The point is that Jesus invited his first century disciples (and his twenty-first century disciples as well) to pray a daringly intimate prayer of simultaneous and opposite pleas.

Here – I’m holding out this Prayer Coin to you. Take it? Feel the weight of it as you turn it over and over in your palm. Honest. Abandon. Abandon. Honest.

Now, are you ready to try it out? This Prayer Coin that might just cash in a deeper faith for you?

First – be honest: What are you currently wanting, needing, desiring before God?

And after you’ve poured out what’s really in your heart, instead of saying what you think you’re supposed to say… try a pivot. Flip the prayer coin to the other side: abandon. What might you want for me Lord?

Abandon asks how far will you go to commit your wants, needs and desires to what God wants for you and your life?

And then in each need, back again to honest. Then a pivot to abandon. Again and again, all the while learning more and more about what you really want and what God wants as well.

Prayer is like a coin. On one side is honest: the freedom to be ourselves in relationship with God. On the other side is abandon: the calling to yield to his desires in our lives and in our world. We spend prayer best, like a coin, with the currency of both sides: honest and abandon. Pivoting from one to another. Flipping first one then intentionally turning to other to allow one side to influence the other.

As you do, you’ll journey deeper in your relationship with God, who uses both sides of prayer to draw us closer to him, just as he did in a garden long ago with his Son. 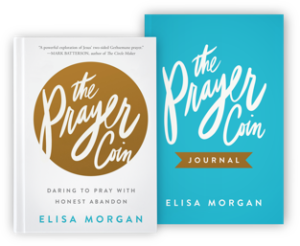 Elisa Morgan is an author and speaker.

Her latest book is The Prayer Coin: Daring to Pray with Honest Abandon. Her other books include The Beauty of Broken, Hello, Beauty Full, and She Did What She Could.

Elisa is the cohost of Discover the Word and contributor to Our Daily Bread. Connect with Elisa at www.elisamorgan.com, @elisa_morgan on Twitter, and elisamorganauthor on Facebook and Instagram.